Celine Dion – The Vegas Years & Beyond 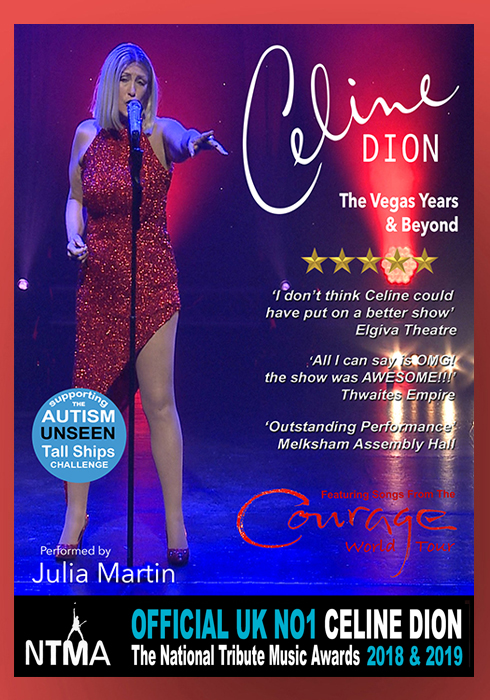 The Vegas Years & Beyond is a dynamic, high energy theatre production that is widely accepted as the foremost tribute to Celine Dion. It is performed by the award-winning Julia Martin, and has been delivered to audiences around the world, with standing ovations on every occasion. After appearing on Sky Television Julia was described as ‘Phenomenal & Outstanding’, and whilst performing her Celine show in Dubai, Julia met both Celine and her sister, who commented after watching Julia’s show, that it was the best Celine tribute show they had ever seen. Julia is also one of a select few Celine Dion tribute artists around the world that can match Celine’s incredible octave range. The show has been described by theatre audiences as totally authentic in every way, and captures Celine’s incredible stage presence, power ballads and mannerisms, whilst delivering a spectacular evening of entertainment, that no Celine fan will want to miss.

In a tribute to Celine’s unparalleled Vegas residency, ‘The Vegas Years & Beyond’ will combine stunning replica costumes; classic hit songs, and a portrayal of Celine’s epic Vegas & Courage performances, into a sensational sound, light, and visual theatre production. This show will not only bring-to-life the inspirational Vegas legacy of Celine Dion but will also take the audience on a musical journey through the outstanding singing career of this singing legend. With meticulous attention to detail, Julia will weave her magic and deliver a show that makes the audience feel that Celine herself is actually in the theatre.